Deprecated: The called constructor method for WP_Widget class in AdvWidget is deprecated since version 4.3.0! Use __construct() instead. in /home/accessadventure/public_html/ACCESSADVENTURE/wp-includes/functions.php on line 5475
 BERKELEY NONPROFIT HELPS DISABLED PEOPLE | Access Adventure 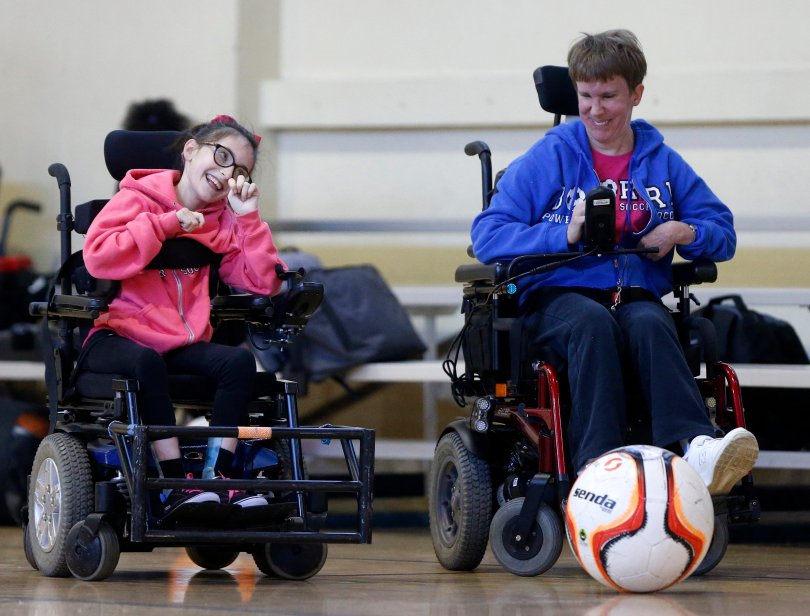 OAKLAND GIRL WITH CEREBRAL PALSY FINDS A TEAM OF HER OWN

OAKLAND — April Cookston remembers the days she sat watching in her wheelchair as her brothers played soccer, longing to scamper in the grass with them. But she was confined to the sidelines.

Those days are over. April, a 10-year-old with cerebral palsy, has found a team of her own: the Bombers, a power soccer team in the Bay Area Outreach and Recreation Program, BORP.

“I go to practice and I feel like I’m with people who are like me, and it’s my home,” she said during an interview at her East Oakland home, wearing a pink BORP sweatshirt. “Everyone at power soccer is my family.”

Celebrating its 40th year, Berkeley-based BORP grew from a small nonprofit formed by two UC Berkeley students denied participation in an athletic class, to an organization that offers adaptive sports to some 800 people, young and old with disabilities.

Besides power soccer, the nonprofit offers wheelchair basketball, flood hockey (a game played with sleds), goal ball for the blind or visually impaired, and outdoor adventures.

BORP has received funding this year from Share the Spirit, an annual holiday campaign to benefit needy residents in the East Bay. The grant is administered by the Contra Costa Crisis Center, and donations support programs of 40 nonprofit agencies in Contra Costa and Alameda counties.

“People have recognized that sports and recreation are not only fun but central to one’s health,” he said. “A lot of people talk about the fact that we are a family. They see each other on a regular basis, and when they are together they are no longer the different kid. They are just kids.”

That’s certainly the case for April. The fifth-grader has changed schools three times in the past four years, recently to Grass Valley Elementary in Oakland after her family moved from Arizona and Sacramento.

The normally bubbly girl’s voice lowered when she explained that at Grass Valley she is the only kid in a wheelchair and the only kid who can’t climb on the monkey bars or go on an overnight, outdoor trip because it’s not wheelchair accessible.

A friend at therapy mentioned BORP’s power soccer program, and April decided to give it a try. On her first day of practice, “she lit up like a lightbulb,” her mother, Kathleen Eastland, said.

On the power soccer court, April leads her team in cheers before they zip around at dizzying speeds in motorized wheelchairs, bumping a large soccer ball with a guard affixed to the front of the chairs. April’s grandfather built her a custom chair.

Her parents say the sport and camaraderie have given her more confidence. Her struggle to meet new friends is a struggle no more.

“The progression in her personality has been huge,” her father, Edson Soriano, said. “That has been a beautiful thing.

“With the confidence came a more open personality than ever before. One thing led to another,” he said.

As the youngest player on her team, it will be April who one day will mentor new power soccer players.

“I’m planning to play it forever,” she said. “Now me and my brothers all play soccer.”